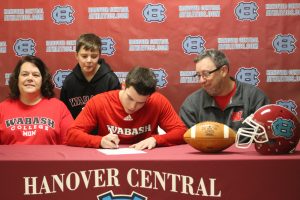 Senior Brett Driscoll has signed his Letter of Intent to play football at Wabash College.  Brett is 19th in his class and has a 4.0 G.P.A.  He also is involved in many activities including Key Club, DECA, National Honor Society and Captain’s Council.  Brett will go to Wabash to study financial economics and minor in business and psychology .  Brett is the son of Kevin and Lisa Driscoll.  We wish Brett the best of luck!! 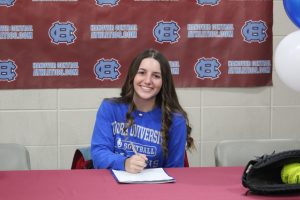 Senior Tyler Chambers, daughter of Katie and Joshua Chambers signed to continue her softball career at Aurora University.  Tyler was a member of last year’s Regional Championship team.  Tyler plans on studying nursing at Aurora next year.  We are so excited to see Tyler play for Hanover Central this Spring.  Good luck to Tyler!! 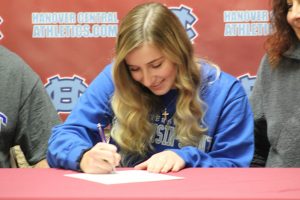 Senior Alyssa Albrecht signed her letter of intent to continue her softball career at the University of Wisconsin-Stout.  Alyssa is the daughter of parents Sandi and Larry Albrecht.  Alyssa is the fourth team member so far this year to sign to play in college.  She was also a starting member on the Regional Championship softball team last year.  Alyssa will go to U of W-Stout to pursue a degree in business administration.  She is currently a member of Hanover’s DECA club.  We wish her the best of luck this Spring playing for the Wildcats and the best in her future endeavors.

Senior Priscilla Seniw, daughter of Fred and Theresa Seniw, signed this week to continue her softball career at Calumet College.  Priscilla will study marketing/business while at Calumet.  Priscilla was on the Regional Softball team last year and we look forward to her senior season for the Wildcats this Spring.  We wish Priscilla the best of luck in her future. 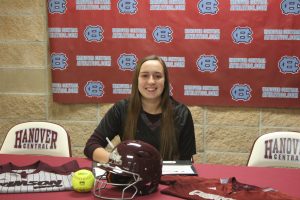 Carina Bolanos – headed to Calumet College, IN to continue her running career in both cross country/track. 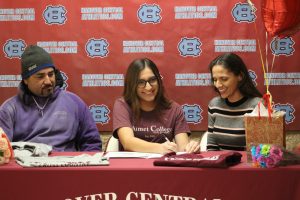 Carina Bolanos, daughter of Jose Bolanos and Alicia Davila, has signed a letter of intent to continue her running career at Calumet College in Whiting, Indiana.  Carina is a four-year letterwinner in both cross country and track and has continued to improve her times over the four years.  Carina is also a talented singer in the choir.  She will go to Calumet College and study biomedical science.  We wish Carina the best in her future. 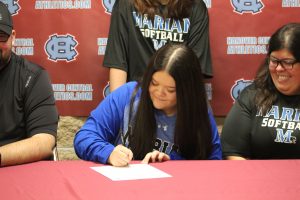 Senior Taylor Towry has signed her Letter of Intent to continue her softball career at Marian University.  Taylor was the pitcher on the Regional Championship team and played a vital role in her team’s success.  She will go to Marian to study nursing.  Taylor still has one season left to play for the Wildcats and we look forward to seeing her this Spring on the mound.  Taylor is the daughter of Christopher and Teresa Towry who are very proud of their daughter.  We wish her the best of luck! 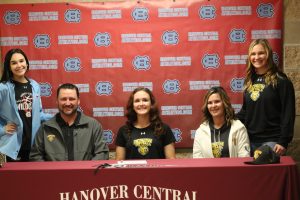 Ashtyn Barnett, daughter of Dionne and Robert Barnett, signed her National Letter of Intent to continue her softball career at DePauw University in Greencastle, Indiana.  Ashtyn will join her older sister, Skylar, who is already there and on the softball team.  Ashtyn plans on studying kinesiology next year.  We look forward to Ashtyn’s senior year here at Hanover but wish her the best of luck next year!! 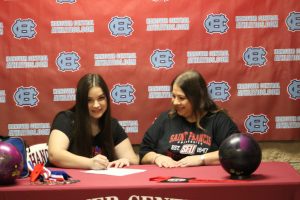 Senior Marissa Metcalfe has committed to bowl at a nationally recognized D1 school.  Marissa will bowl at St. Francis University in Loretta, Pennsylvania.  Marissa is the daughter of Mary and Paul Metcalfe.

The girls’ bowling team finished off a successful season last year by placing 4th in the State Meet in Anderson, Indiana.  They missed 3rd place by the slightest margin of only 5 pins.  The first bowler to ever go down state as an individual, Marissa Metcalfe, placed 9th in singles.  We wish Marissa good luck this season for Hanover and next year at St. Francis!! 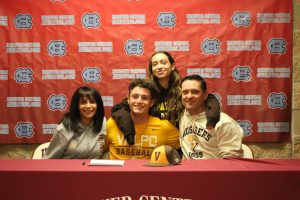 Nolan Tucker, son of Julie and Keith Tucker, signed his Letter of Intent to play baseball at Valparaiso University next year.  Nolan plays middle infield for the Hanover Wildcats.  Coach Ryan Bridges commented that “no one has worked harder than Nolan to play Division 1 ball.  He is well deserving.”  Nolan is also an excellent student ranked #9 in his class with a G.P.A. of 4.1.  He is also a member of the National Honor Society and Captains Council.  We wish Nolan the best of luck. 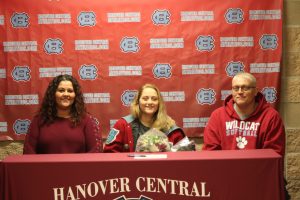 Michayla Ferguson signed a letter of intent on Wednesday to continue her softball career at Prairie State College in Illinois.  Michayla is the third Wildcat to do so in recent years.  Her parents, Michelle and Brian Ferguson were both present as Head Coach, Frank Wilkins, of Prairie State College presented Michayla with her letter.   Michayla has worked hard to get to this point in her career and we would like to congratulate her and wish her well as she completes her high school softball career this Spring. 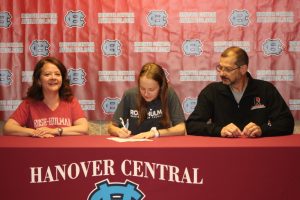 Senior Jenna Voticke signed her letter of intent to continue her volleyball career at Rose-Hulman Institute of Technology.  Jenna is ranked 2nd in her class and has a G.P.A. of 4.35.  She will be pursuing a degree in optical engineering.  Jenna’s parents are Brian and Laura Voticke.  We wish her the best for her bright future!! 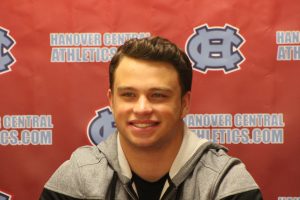