Marissa Metcalfe & Isabel Sitkowski earned their spot to represent Hanover Wildcats at the Bob Rohrman All-State Tournament in Fort Wayne this past weekend.   Congratulations to Marissa on winning  the tournament and becoming the Indiana High School All-State Tournament Girls Champion.

Marissa was also named to the following:  All-State First Team and the All-Tournament Team.  Both  Izzy & Marissa were  named to the Northwest All-Region Team.  Congrats to both girls on a great high school season.

Marissa is pictured with her certificates for all-state first team, all-tournament team, and northwest all-region team. She also was presented a jacket for being named one of the five players for the Indiana high school bowling First Team all-state, ranking third highest average in the state.

Marissa and Izzy were also presented with certificates for northwest all-Region team.  We are so proud of these girls and they have represented Hanover well! 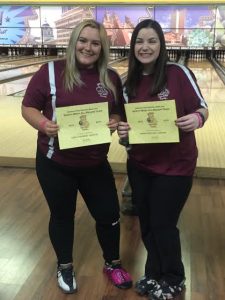