(Munster, IN) Hanover Central has had a productive summer of practices and workouts, according to second year head coach Brian Parker.

“This last month and a half has been one of the best summers I’ve coached,” Parker said. I can’t wait for August 5th.”

August 5th is the first official day for football practices to begin, and while that is the official start date for the fall season, Parker knows that the key to playing competitive football in the fall is to have good practices all summer.

The IHSAA sanctions twelve Football Activity Days over the summer. Those can include Competition Days, practices against other teams that amount to controlled scrimmages.

Hanover traveled north on July 18 to visit Munster at Mustang Field. While the scoreboard is not turned on—and neither coach would want to keep score in July anyway—Hanover Central competed well in a low-contact scrimmage against their Class 5A competition, and more often than not looked like the better team.

Breedlove, a senior, is playing his first organized football since 2015, when he played for Hanover Central Middle School as an 8th grader. He seems to have remembered the game well, as he also impressed on defense, hauling in an interception and breaking up multiple passes at cornerback.

Perhaps the most athletic play of the night was when slot receiver Adam Graham made a one-handed, 20-yard catch over the middle that likely would have resulted in a touchdown. In low-contact practice scrimmages, plays are often whistled dead to avoid full tackling.

“90% of our offense is already in, so when we come back in August it will just be about sharpening it up,” Parker said.

The Wildcat defense was not to be outdone. They often stymied the Mustang offense, and registered six takeaways: three interceptions and three fumble recoveries.

Kuiper had an interception and had a second slip from his fingers. Sophomore Garret Schreiber snagged a pick-six.

The scrimmage also gave Parker and his staff a chance to see some new faces.

“It’s important for our coaches to see the toys they have to play with this season,” he said. “We also have a bunch of guys who don’t have Friday night experience, and this is an opportunity for those guys to get on film and get some reps.”

Parker had a large amount of turnover on his coaching staff, but said the summer has been productive, and that his new coaches align well with his offensive and defensive philosophies.

“I’ve been more than happy with the way we’ve come together as a staff,” Parker said.

Parker reached out to Munster coach Jason Grunewald to organize the Competition Day. He said that it was not only a good chance for the Wildcats to play up a few classes in competition, but he has great respect for the Mustang program. He also admitted that he has a personal connection, as his family roots are in Munster.

HC has two weeks off before practice begins, and after the scrimmage he encouraged his players to use that time off wisely: get rest, stay fit, and eat well. 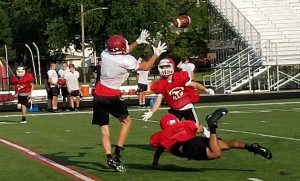 Wide receiver Ryan Breedlove gets behind the Munster secondary for his second of two touchdown catches in a scrimmage July 18th.

The Lowell Tribune will have this story and photos in its next edition, which hits newsstands July 24th. If you’re looking for media coverage of Hanover sports, turn to the Lowell Tribune. The Lowell Tribune has regular, in-depth coverage of HC Athletics, as well as regular news coverage of Hanover Community Schools and the town of Cedar Lake. ‘Like’ their Facebook page for stories throughout the week and for HC Football game stories on football Friday nights. Pick up the print edition each week for just $1 at Strack & Van Til, Casey’s, Zip Foods, and Walgreens, or call (765) 884-1902 and ask about home delivery.