Ashton Verbish is your typical 3-sport athlete.  He runs cross country and track and plays basketball in the winter.  You would think that he would have just enough time to worry about himself.  But yet Ashton makes time to be a true teammate!  Last weekend the middle school cross country team traveled to Hebron to participate in the Dave Walker invite.  Ashton’s young teammate, who is a rookie on the cross country team, was very worried about remembering which way to turn to follow the course.  Ashton jumped in to help.  Here is where the story gets interesting!  The following is a Facebook post that a Hebron parent wrote on the Hanover Facebook page hoping that Coach Chris York and Ashton’s parents (Josh and Julianne Verbish) would see what a great kid he was.

“Today at Hebron’s Dave Walker invite there was a young man on Hanover’s team.  He was a smaller built boy and wearing a Wildcats knit stocking hat.  He approached a group of us Hebron parents and asked if we would be staying where we were on the course.  We replied yes.  He asked if we told all kids running where to turn because he had a teammate that was very nervous about making a wrong turn and he was worried he wouldn’t be able to help him out at the corners.  We assured him we wouldn’t let his teammate take a wrong turn.  He thanked us.  It was just really nice in this day and age of so much negativity and nastiness to see a teammate have such genuine concern for another on his team.  This boys level of manners and politeness were amazing.  I wish I knew who his parents were so they could know their son is a class act.  I am hoping this makes it to the coach and he will know who this boy is.  Way to go!!”

Ashton is a class act!  He was presented by Athletic Director Chris Rossiano with the IHSAA sportsmanship pin.  These pins are handed out to athletes who show great sportsmanship.  Congratulations Ashton!  #faceofsportsmanship 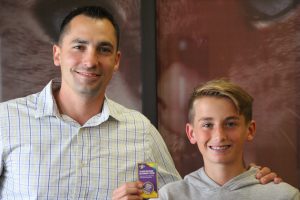