On Thursday October 8th, The Hanover Central Lady Wildcats faced off against the Hammond Clark Lady Pioneers in the Semifinals of Sectionals. The Lady Pioneers came into the game with determination, as they had a shortened season because of COVID, and it was the last year their school would be opened. The Lady Wildcats were ready to play and determined as well. Both teams wanted to win and make it to the Sectional Championship. The first half started with good ball movement on both sides of the field. With about three minutes in, Freshman Emmi Doty took a shot and made a goal with an assist from Junior Julia Schuldes. For the rest of the half, there were no scored goals for either team. The Lady Wildcats were eager to put another point on the board. At the beginning of the second half, Doty was able to put on two more goals and scores. Also, freshman Skylar Ferry chipped in one goal. Great saves by Junior goalkeeper Maddie Stutsman lead to a shutout for the Lady Wildcats. The final score was 5-0 with Hanover Central advancing to the championship.

On Saturday October 11, The Lady Wildcats faced off against the Wheeler Bearcats in the Sectional Championship. Both teams knew they were going to have to come ready to win. The first half started and with a couple of miscommunications, the Bearcats were able to put a goal on and score. The Lady Wildcats put a couple of shots on, but they could not get one in. Before the half ended, the Bearcats were able to add another goal. The second half started with Wheeler able to put on three more goals to further their lead on the Wildcats. A couple of games before, Senior Savannah Ferry tore her left ACL and was unable to play in sectionals. Coach Pattison put her in for the last three minutes, and the generous Wheeler coach allowed her to score her last high school career goal. That one goal led to her being the second all-time leading scorer in Hanover history. The sectional championship game ended with a score of 1-5. Special shoutout to the five seniors for dedicating four years to Hanover Central soccer: Nevaeh Govert, Madeline Kartz, Brianna Behling, Star Sanchez, and Savannah Ferry. 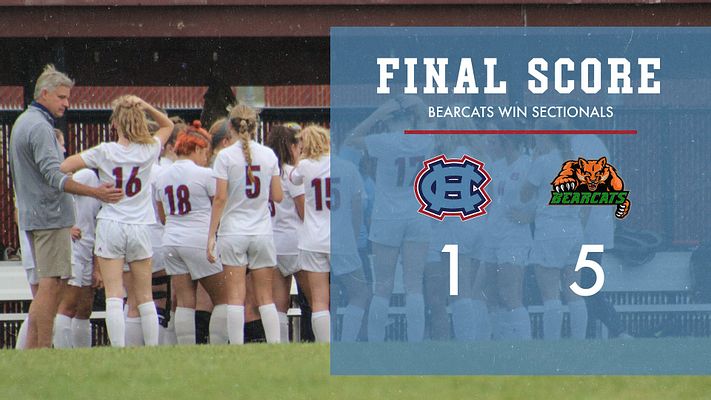