On 11/16, the 7th Grade Boys went on the road for their first road game against Boone Grove.  After coming out strong, Boone Grove took advantage of some fast break errors, foul trouble and missed layups to come back headed into the second half.  The second half saw some stronger play all the way around

IHSAA Student-Athlete Tip of the Week (11-16-20) POSTED ON: NOV 16, 2020 IHSAA Student-Athlete Tip of the Week (11-16-2020) “Promoting education based athletics in Indiana” Xander Schauffele is one of the top professional golfers on the PGA tour.  His father has been his only swing coach throughout his golfing career. Schauffele’s father stated during last

Boys Varsity Wrestling · Nov 16 A Day of a Wrestling Tournament

Have you ever wondered what a day of a wrestling tournament is like? Well, I asked Senior Bryan Hoover what it was like, and it is a lot! I knew a lot of work went into wrestling but, I didn’t think it was this time-consuming. These wrestlers at Hanover Central have a tremendous 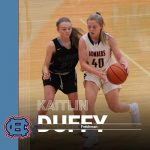 The Hanover JV girls basketball team has a lot of new faces this year. They are a younger team and have brought in a lot of talent for the next four years as well. Freshman Kaitlin Duffy is one of these upcoming stars. She has been playing basketball for the Wildcats since first grade for the

Recently, I have had the great pleasure of getting to ask some bowling and schooling-related questions to none other than Ruthie Rakowski, a long time friend of mine. Here is the interview. Q. What are you most looking forward to in the bowling season this year? A. As of right now, I am most looking

On Tuesday Night, the girl’s took on the Rensselaer Bombers @Rensselaer. In both of the Varsity Girl’s games, they have been the away team. This, being the second game of the year, was quite the matchup that played out to be a great game to watch. The ‘Cats were looking to get their second win

Parker GSSC Coach of the Year; 13 Wildcats named to All-GSSC teams (CEDAR LAKE, IN) The Greater South Shore Conference (GSSC) has announced its 2020 football All-Conference selections, and Hanover Central High School is well-represented, led by its head coach Brian Parker. Parker was named GSSC Coach of the Year. Parker, in his third year