On Thursday night, the Hanover Central Wrestling team faced off against the Highland Trojans. There were only three total matches which led to a 30-36 loss. Kyle Hoover and Colton Zableckis both walked away with victories while Sam Chambers however was unable to secure a win.   The team will be competing in the Harvest

Just yesterday, we had a chance to talk with Coach Hoover about the wrestling team and how and what he thinks of the team going into the season.   Q: With COVID-19 being a worldwide problem, do you see any changes with how the team plays through this season? A: I think the team will play through the season

Interviewing an Alumni A former Wildcat wrestler has returned to Hanover to help coach the 2020-2021 wrestling team. Ryan Breedlove was an outstanding wrestler for Hanover through his 4 years here. We decided to interview him because we were curious about why he came back to help the wrestling team this year. Here is what

We decided to put the spotlight on an up and coming sophomore who is making a difference on the wrestling team. His name is Sam Chambers. He has been wrestling for quite some time now and is hoping to make an even bigger impact this season in wrestling. We wanted to know what wrestling means

Boys Varsity Wrestling · Nov 16 A Day of a Wrestling Tournament

Have you ever wondered what a day of a wrestling tournament is like? Well, I asked Senior Bryan Hoover what it was like, and it is a lot! I knew a lot of work went into wrestling but, I didn’t think it was this time-consuming. These wrestlers at Hanover Central have a tremendous

Today, we got to sit down and talk with Hanover wrestler Skyler Iverson about what it’s like being on the Wrestling Team. Q: Is being a female wrestler hard, and is it harder being a girl in a male dominated sport? A: Wrestling is hard in general. The injuries, cutting weight, little sleep. Wrestling is like a game of 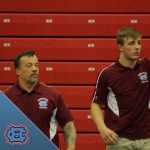 We were fortunate to get a hold of Coach Ryan Donovan who is the Head Coach of the Wrestling team here at Hanover Central High School. We wanted to see how he ended up at Hanover and what has attached him to wrestling after all of these years. This is how he answered:   Question:

Wrestling is mankind’s oldest form of combat, its origins go back to the dawn of civilization. Carvings and drawings estimated to between 15,000 and 20,000 years old, found in caves in southern Europe, illustrate wrestlers in hold and leverage positions. A small bronze statuette of wrestlers, apparently used as a vase, was unearthed in the

Senior Spotlight: Bryan Hoover We were lucky enough to catch Bryan Hoover in his free time. He is a senior on the High School wrestling team. Bryan has been making an impact on the wrestling team since freshman year. Between being in football season still and starting wrestling soon, it was hard to get in

Wrestling season is coming upon Hanover Central High School and we are ready for it! We asked Coach Donovan how he feels about the upcoming season. “We are really excited. We are looking to make even better strides than we did last year. We are hoping to win the conference as a team.” The 2020-2021